On 17-18 May 2017, The ORPHEUS team presented selected project results on object-based audio at an EBU seminar in Geneva.

The European Broadcasting Union ,EBU, is the world’s leading alliance of public service media, representing 73 broadcasters in 56 countries. It is mainly known for organizing the Eurovision Song Contest, but it plays also an essential role for European collaboration in creation and content exchange of radio and television programs. EBU’s technical division develops and recommends technical standards, assuring interoperability in international technical broadcast infrastructures. And the EBU serves as permanent information and training hub for their members, constantly seeking to reflect and multiply new ideas and developments.

Earlier this year, Roger Miles, senior project manager at EBU’s technical department, and EBU-FAR (Future Audio and Renderers) group chair Matthieu Parmentier from France Televisons approached us with plans for an ‘object-based audio’ seminar, offering a special ORPHEUS session in addition to the regular round-up presentations from stakeholders and market participants. We were, of course, delighted (it has to be mentioned, that exactly four years ago, some of us met here in Geneva for the first time at the EBU workshop “Immersive Audio over Headphones”, where first ideas and concepts for “object-based audio” were presented. This meeting is to be regarded as the nucleus of the whole ORPHEUS project). The final line-up of the seminar proved to be both prominent and encompassing, offering the participating audio and broadcast professionals a focused overview of all present approaches and solutions available.

For the kick-off of the event, Ludovic Noblet, Director of our partner b<>com’s Hypermedia Research Department, delivered a keynote on “Editorial, social, marketing future of multimedia contents and the place of sound in this future”, going beyond the dimensions of pure technical production and broadcast issues.

Although there were almost 30 presentations en suite, enough time was left, to see and listen to a dozen of demos, staged in the lobby of the big EBU auditorium and some showrooms. 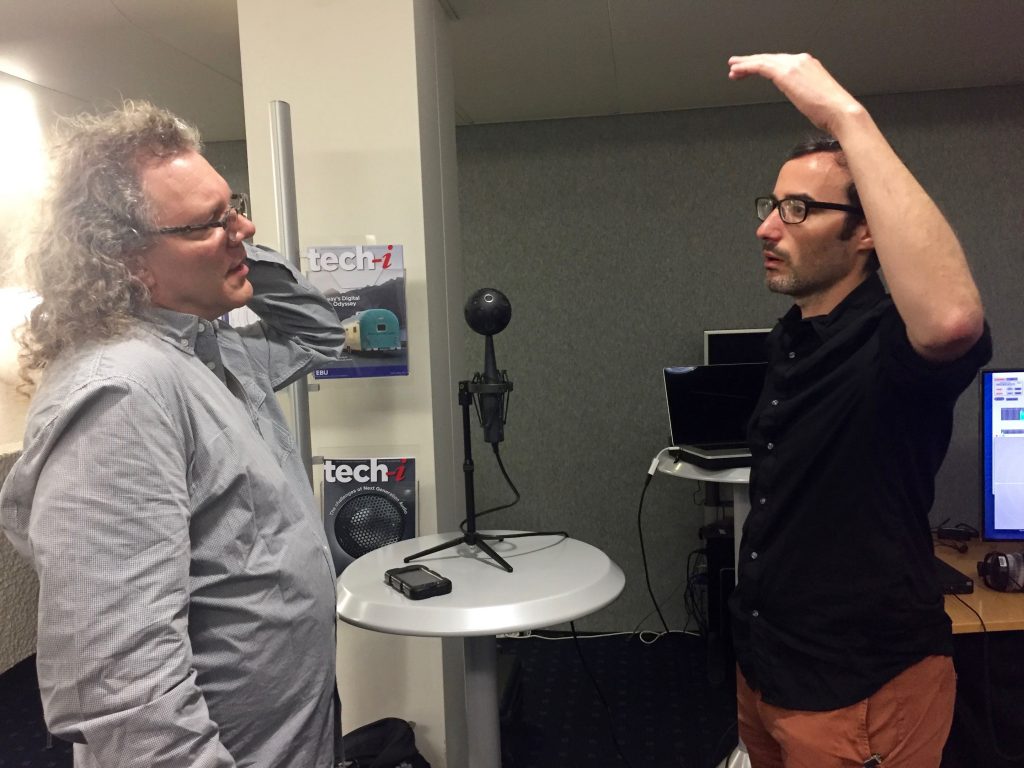 The ORPHEUS Session finally provided a concentrated overview on our tasks and achievements so far:

Very encouraging were the results of some live polling in the room during the closing round table discussions. To sum up, object-based is regarded as tomorrow’sbroadcast  technology, open standards for it are essential and the main features of the first implementation cycle are indeed most requested.

Although running in strong global competition, our concept and approach in ORPHEUS attested to be the most complete, advanced and future-oriented to the manifold demands and complex infrastructure of broadcasters. Moreover, it is optimally capable of supporting the transition from linear to non-linear, and both on-air and on-demand listening, using broadcast and IP technology.