For pilot phase 2 of the project the ORPHEUS team decided to implement and demonstrate an important interactive use case: Programs with a variable length. In practice this means, that, given a certain level of interest, the same program can be listened to at different degrees of content depth and therefore different lengths.

During production the content is to be sectioned and tagged to indicate which sections fit to the following levels of interest:

These descriptions won’t necessarily fit for every production, but they provide a sense of how the levels are expected to be used.

The task of the DAW is to provide the user with means of editing levels of interest. For Sequoia this was realized in the form of markers on the project timeline, which can be set from the “marker manager”. A marker indicates that all content between its location and the location of the next marker are part of a certain interest level. By using keyboard shortcuts, they can be added easily during playback.

In addition, a preview mode has been implemented. By selecting a marker of any interest level, only the sections of that level and levels below it will be played. Sections marked with a higher interest level will be skipped.

For the ADM export these markers will be stored in the metadata chunk of the BW64 file conformant to the EBUCore definition. This information will then need to be transported further along the broadcast chain to eventually be used on the end-user device.

As a future enhancement it seems to be useful and possible to mark also complete tracks / ADM objects with interest levels. This could be used for improved handling of background music or atmosphere audio. 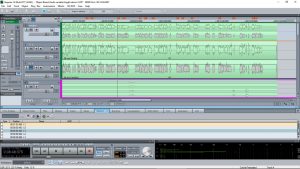