Munich, 11th May 2018. Imagine you could adapt the length of a radio documentary as you require or listen to a radio drama from the positions of different protagonists in the play. These and many more personalised, immersive listener experiences become possible due to a novel technological concept called object-based media, which will fundamentally change the production and user experience of radio broadcasts and multimedia productions. Key tools and apps for implementing object-based media for audio content have been developed by ORPHEUS, an EU-funded research project performed by ten major European media industry players.

On 15th May 2018, the consortium will present their results at a workshop in Munich to about 150 representatives of the global media industry. The event will be hosted by IRT, the research institute of the public broadcasters of Germany, Austria, and Switzerland.

Object-based media is an advanced approach for creating and deploying interactive, personalised, scalable and immersive content. It allows media objects to be assembled in novel ways to create new and enhanced user experiences, being responsive to user needs as well as environmental and platform-specific factors. Examples are the adaptation of the dialogue level, the flexible playback on any end device or the variable length of a program. This technology is also an essential component for Radio/TV/Online cross-media demands. Moreover, it enables the transition from linear to non-linear and both on-air and on-demand listening, using broadcast and IP technologies.

Broadcasting architectures and infrastructures have been developed, refined and optimised over the last 100 years. Up to now, the final product delivered to the audience, was assembled edited, mixed and configured as an unchangeable entity, leaving little or no options for adjustments according to the reception conditions and the personal preferences of the recipient. The object-based media approach fundamentally changes this principle: A production is now a collection of media assets, so called ‘objects’, along with parameters or ‘metadata’, describing their attributes and relationship. This package is delivered to an end user device, where it gets optimally ‘rendered’ according to the capability of the device, environmental conditions and user preferences.

The ORPHEUS project has created a full set of tools and applications for all stages of the complete broadcast workflow. The consortium ran two successful pilots to demonstrate the key features and benefits of object-based broadcasting, including immersive sound, foreground/background control, language selection, and enhanced programme services. In addition, Pilot 1 was the first ever live object-based interactive radio drama, and was produced using the BBC’s IP Studio platform. Pilot 2 premiered the introduction of variable-length functionality for audio. These pilots have proven the advantages of object-based media as a universal, innovative approach for media production and its applicability in real-world broadcast environments.

The key achievements of ORPHEUS include:

The project results are fully documented in public deliverables, available on the project website. 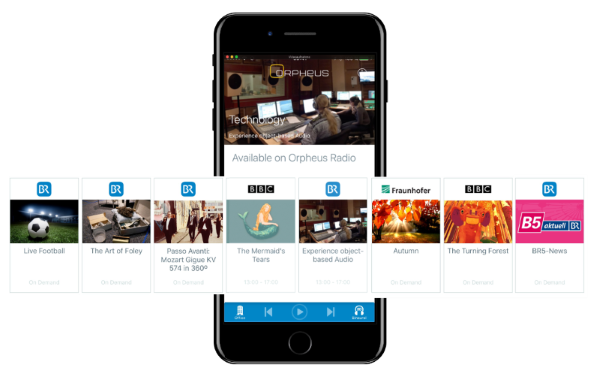 An evaluation version of the ORPHEUS app for iOS, which demonstrates the project achievements using the pilot productions made by BBC and BR, is available upon registration from the projects website. These productions show the advantages of object-based audio in a broad range of radio formats, including live football report, documentary, radio drama and music.

Acknowledgement
The ORPHEUS project has received funding from the European Union’s Horizon 2020 Programme for research, technological development and demonstration under grant agreement no. 687645.