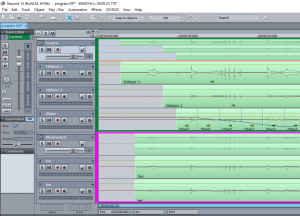 Sequoia is a Digital Audio Workstation (DAW) provided by ORPHEUS project partner MAGIX. It has been an integral part of the production equipment at public European broadcasters, such as ARD, HRT, Radio Sverige, RTSI, ORF, and ZDF, of classical music productions, universities and theaters, as well as leading mastering studios around the world, including Sony Music, Sterling Sound New York, and Air Studios London. For sound engineers, music producers, and radio journalists, Sequoia is an indispensable tool for any type of professional audio production.

In cooperation with the project partners, Sequoia is currently being developed as the main audio production tool in the ORPHEUS project. To achieve that, its feature set is being extended to integrate with the rest of the new object-based production chain.

The project consortium has made progress on supporting the import and export of files containing the additional metadata required for an object-based workflow. This metadata conforms to the Audio Definition Model (ADM) and was mapped to existing structures in Sequoia. Tracks are created for the individual objects described in the ADM. Folder tracks are used to represent the audio content level of the ADM hierarchy. During import, gain and panning information is translated into automation curves, which represent changes to these values over time. Adjustments to these curves or the audio itself can be exported to a new ADM file. Matching these structures in a fresh project also allows for basic authoring of new ADM files.

Furthermore, we are implementing a metadata editing module to give easy access to all available metadata as well as provide a way to edit information items which have no direct equivalent within Sequoia, e.g. content language.

Beyond the aspects of editing and mixing, Sequoia will soon also be used to render and write multi-capsule microphone array feeds, including corresponding panning information, to ADM files. Work continues to integrate a rendering solution into Sequoia directly, allowing object-based audio to be previewed on the desktop. We are also investigating the possibilities of streaming object-based audio directly from Sequoia to the production system.